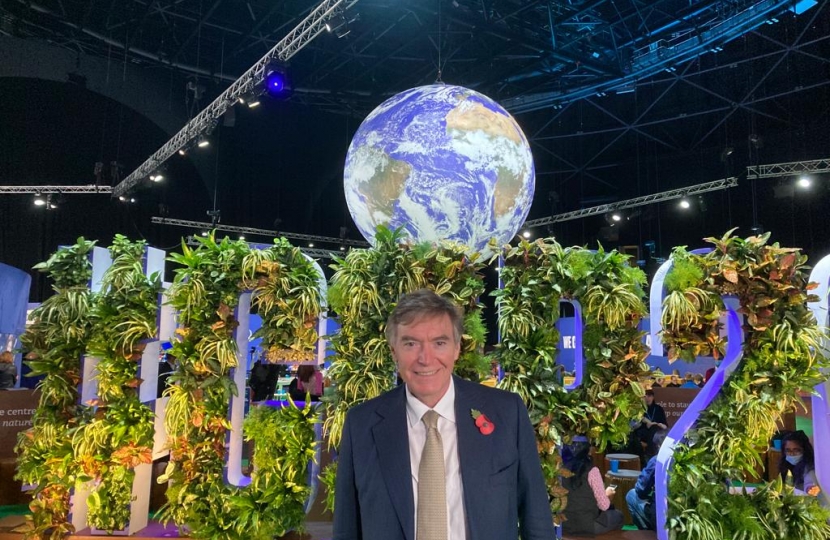 Philip Dunne, MP for Ludlow, attended COP26 for part of last week in his role as Chairman of the EAC. He commented today on his impressions of the first week of the conference:

“It has been an interesting few days in and around the Blue and Green Zones at the COP26 Conference in Glasgow. The challenge to decarbonise the world’s economies is clearly massive, but the determination to do so was writ large from political leaders right across the spectrum of delegations and observers representing every country on the planet.

This was the first COP climate conference I had attended, which makes comparison hard for me to make. But my impression was of a groundswell of positive statements and commitments in week one, which will now need to be documented in week two, to enable governments to be held to account and deliver action on the ground. I am told week two is always more challenging.

I was very pleased to have been able to co-Chair an event for parliamentarians to discuss how we will hold our governments to account for the pledges they make. This was a well-attended session, with impressive contributions from counterparts in Indonesia, Pakistan and Uganda, as well as other cross party Committee Chairs from the Commons and Lords.

I was also honoured to close the events at the UK President’s Pavilion on Saturday and thank the distinguished economics professors, Lord Nick Stern and Sir Partha Dasgupta, who had a fascinating discussion around the economics of climate change and nature.”

COP26 has already delivered crucial international climate action. Some of the initiatives include:

As the second week of negotiations at COP26 begins, focus turns to the impact of extreme weather, environmental degradation and rising sea levels and what is being done - and can be done - to adapt, including in transport.