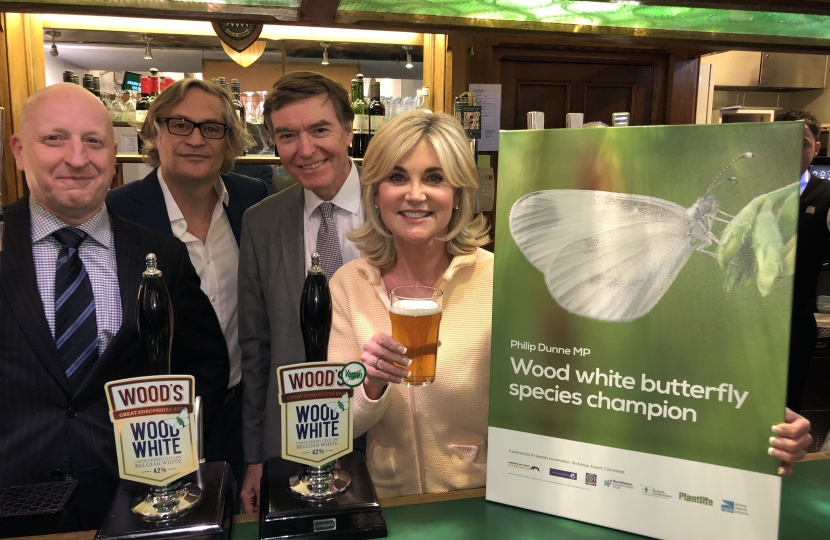 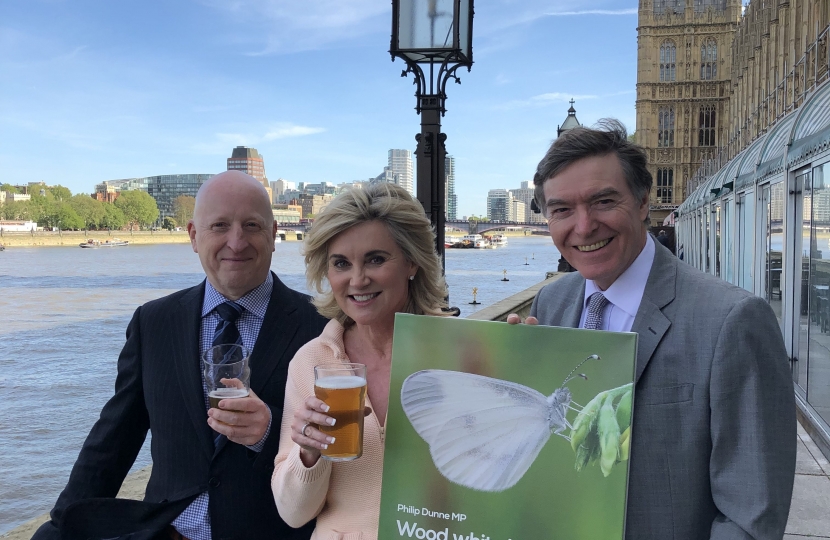 South Shropshire MP Philip Dunne and TV presenter Anthea Turner this week joined forces to raise awareness of the Wood White butterfly, with the launch of a new Wood White beer in the House of Commons.

The Wood White beer has been produced by South Shropshire brewery Wood’s to support the butterfly, with £10 from every cask sold going back into preservation efforts for the species, which has declined by 88% in the UK since the 1970s. Studies show only around 50 colonies of Wood Whites remain in England and the species is at risk of extinction.

Mr Dunne, Butterfly Conservation species champion for the Wood White, arranged for the beer to be a guest ale served in the Strangers Bar in the House of Commons.

Mr Dunne said: “As Species Champion, I am delighted that this special beer has been produced to help raise both awareness and funding for the Wood White butterfly. It was great to have Anthea Turner with us, to launch the Wood White beer in Parliament.

I am grateful to Wood’s Brewery, based in Wistanstow in my constituency, and Butterfly Conservation, for their combined efforts in making this possible. At least 300 pubs are set to stock the beer, so I hope people will get behind the appeal and enjoy a fantastic South Shropshire beer at the same time!”

Anthea Turner, supporting the campaign to help protect Wood White butterflies, said: “I am backing efforts for preserving and improving habitats to encourage native butterfly species such as the endangered Wood White. Any initiative like Wood White beer to raise awareness and funds for Butterfly Conservation is a great idea. It’s also a great beer!”

Co-owner at Wood’s Brewery, Stephen O’Neill, said: “We are proud to be part of such an important local conservation project. Supporting the Wood White butterfly with a white ale from Wood’s Brewery couldn’t be a better fit. Preserving our region’s environment and working with our local community is integral to what we stand for.”

Nigel Symington of Butterfly Conservation said: “I was delighted to see at first hand the initiative you’ve taken to introduce the beer to the bar there, and the very professional way in which it has all been merchandised.  As people become ever more aware of and concerned about issues of conservation, it’s great to see such a positive message being promoted and to showcase so effectively some of the work that is going on with the aim of halting the decline of a threatened species.”

The Business Secretary, Alok Sharma, wrote for The Sun on Sunday thanking workers and businesses for their support during the coronavirus pandemic.