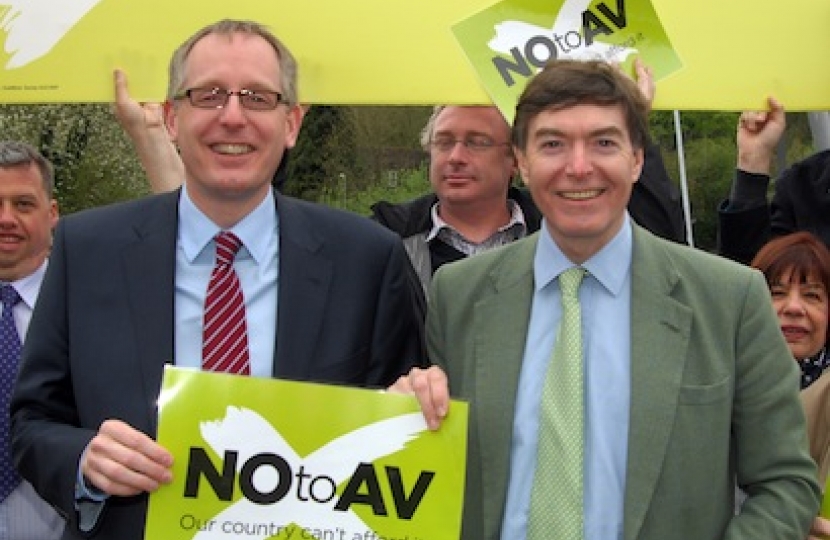 “The referendum on whether or not to abandon the parliamentary election system which has served our country well for many years clearly crosses the political divide.   I am glad to stand alongside colleagues from all political parties who believe in one person one vote, not giving more weight to those who vote for the least popular candidates.   AV is also a costly system which gives more power to politicians and less to voters.   That is why I am strongly opposed to it and urge you to vote No on 5th May.”

“There are many issues which divide Philip and I, but on this we are united. The current system maintains a clear constituency link and provides, in the most part, for strong and stable government. In addition to this, in the current economic climate, spending £250 million on a cosmetic change to the way government is elected is, in my view, a waste of money.”

The change to AV has been estimated to cost up to an additional £250million. Local councils would have to spend money on costly electronic vote counting machines and expensive voter education campaigns.

The winner should be the candidate that comes first, but under AV the candidate who comes second or third can actually be elected. That’s why it is used by just three countries in the world – Fiji, Australia and Papua New Guinea.

Voters should decide who the best candidate is, not the voting system. In addition, AV leads to more hung parliaments, backroom deals and broken promises, like the Lib Dem tuition fees U-turn.

Instead of the voters choosing the government, politicians would hold power. It should be the people, not politicians, after an election who decide who runs our country.

“The AV system is a backwards step for democracy. It allows those who vote for candidates who secure the least votes to have their votes counted more than others.”