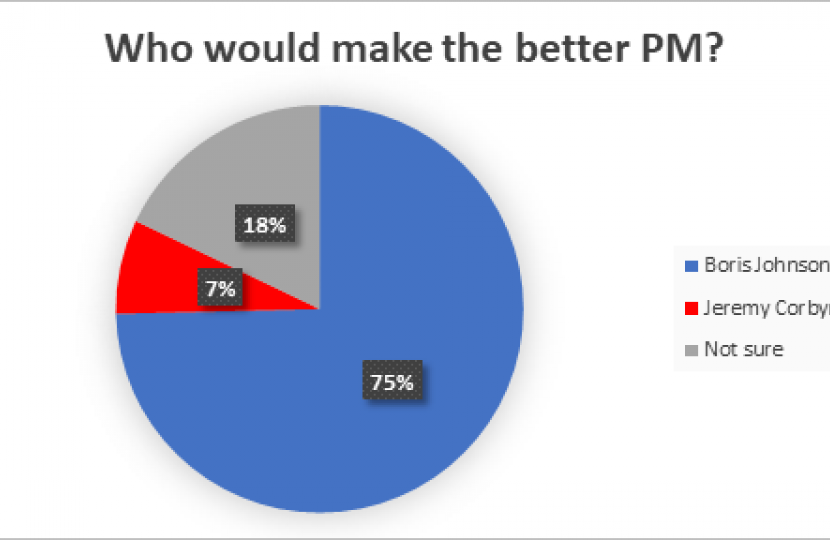 56% of those responding said they favoured leaving the EU on WTO terms on 31st October. A further 14% said the UK should leave with a deal as soon as possible, while 7% said the issue should be resolved by a General Election.

Only 15% said they supported Labour’s policy of a second referendum, and just 8% favoured the Liberal Democrat policy of Revoking Article 50 without going back to the people.

Asked who they would prefer as Prime Minister, Jeremy Corbyn or Boris Johnson, 75% of those responding picked Mr Johnson, with just 7% supporting Mr Corbyn. 18% said they were not sure.

When asked if they supported Mr Johnson’s plan to leave the EU by 31st October, 76% did support the PM – compared to 20% who did not, and 4% who were not sure.

Mr Dunne said: “These preliminary results are from 3,500 people in South Shropshire, giving a fascinating insight into how my constituents currently feel about the state of politics right now.

While this is not a scientific poll and is just a snapshot, it is clear the Prime Minister enjoys substantial support in South Shropshire for his plan to get us out of the EU by 31st October – and of the two people who could credibly lead the country following a General Election, he is the overwhelming choice over Jeremy Corbyn.

Of the 5,200 responses received to date, 2,000 were submitted online. My team are still working hard to input all the results, and have analysed 3,500 responses so far, so we may see some change in the final results. The survey remains open, so those who have not yet had their say can do so online at www.tellphilip.com.”

Dunne welcomes over half a million pounds to reduce Shropshire homelessness

South Shropshire MP Philip Dunne has welcomed over half a million pounds of government funding to tackle homelessness in Shropshire.