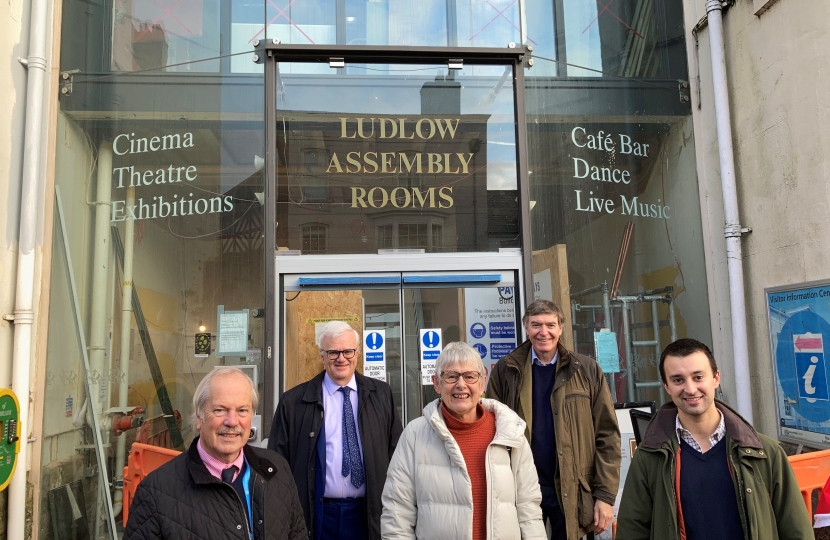 Ludlow MP, Philip Dunne, has welcomed announcement of a further government grant of £130,000 for Ludlow Assembly Rooms, announced today by the Department for Culture, Media and Sport.

As part of the government’s Culture Recovery Fund, Ludlow Assembly Rooms has been granted additional funding through the Arts Council for England, as part of a package of grants due to increased capital costs and delays for projects due to COVID19.

The grant means work to complete a new café kitchen and purchase of a latest state-of-the-art digital projector can be completed, helping to secure the long term future of the Assembly Rooms. This complements the core funding for the project from the European Regional Development Fund, as well as earlier commitments from the Arts Council, Shropshire Council, and Ludlow Assembly Room’s own significant fundraising efforts, to transform the venue into a financially and environmentally sound flagship for the arts in South Shropshire. It follows an earlier grant of £97,250 from the Culture Recovery Fund in October.

Mr Dunne said: “I was really pleased to have been able to take a socially-distanced look at the works to transform Ludlow Assembly Rooms with the Trust chair Gareth Williams, volunteer Chief Executive Helen Hughes, and Shropshire Council Leader Peter Nutting.

This was on the day the Assembly Rooms received news of an additional £130,000 grant through the government’s Culture Recovery Fund, distributed by the Arts Council as part of a £600 million package to help arts organisations who have suffered delays in capital projects due to the COVID pandemic.

This funding will help get this major refurbishment project back on track, hopefully to open when performing arts events are able to return to normal next year. The Assembly Rooms are being transformed to maintain this important venue to sustain much of the cultural vibrancy available for Ludlow and wider South Shropshire area. I commend everyone involved who have been working so hard to make Ludlow Assembly Rooms sustainable for the future, and can’t wait to get back to watching performances there again next year.”

Gareth Williams, Chair of Ludlow Assembly Rooms said: “Throughout our long period of closure for building works and then Coronavirus, we have stood by the community and Ludlow and by our hardworking staff.  This funding means we can look ahead with confidence to being able to reopen in the spring, even if we still have small amounts of money to raise to finish the task we have set ourselves.”

Helen Hughes, Voluntary CEO of Ludlow Assembly Rooms said: “These last few months have been extraordinarily difficult for both the Trustees who manage the charity and for the staff, who have been unstinting in their support.  This funding will act as a springboard for the opening of this much loved facility for the whole community of Ludlow.”