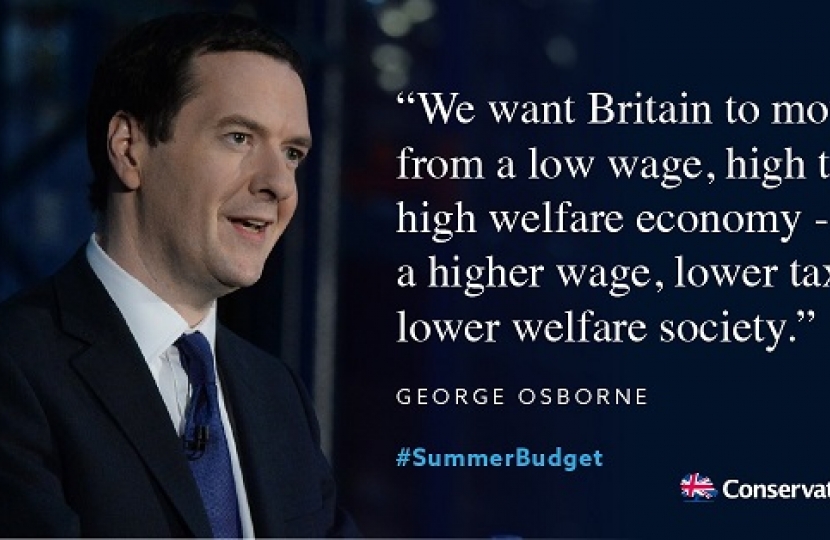 The Chancellor delivered the first fully Conservative budget in eighteen years, setting out a plan to reinforce balanced economic growth across the UK, while continuing to reduce the deficit and get Britain back in the black.

Today’s budget comes as RBS regional growth tracker shows Shropshire’s economy grew at 3.1% in the first three months of this year, outperforming other regions in the West Midlands.

Mr Dunne said: “I thought there was a lot for people in Shropshire to welcome in today’s budget. The Chancellor confirmed that Britain looks set to be the fastest growing economy in the G7 for a second year in a row, and borrowing and debt continue to fall.

The Chancellor set out our plan to move Britain from a low wage, high tax and high welfare society to a high wage, low tax and low welfare economy.

A new National Living Wage will increase wages for the lowest paid in Shropshire, and increasing the tax free personal allowance will mean local families are better off.

Businesses will be helped to create jobs by a further cut in Corporation Tax, and by extending the Employment Allowance to £3,000. This 50% rise will mean a Shropshire company would be able to employ four full time employees on the new National Living Wage without paying any National Insurance at all.

This was a measured budget, which reflected our Conservative plan to make our country more secure and improve lives for people in Shropshire.”

Mr Dunne, who is Minister of State for Defence Procurement, responded positively to the Chancellor’s commitment to spend the NATO target of 2% of GDP on defence, saying:

“I am very pleased the Chancellor committed to spend 2% of GDP on defence, to ensure Britain continues to meet its NATO commitments. I will continue to play my part in ensuring there is value for money for taxpayers in defence procurement, while securing world class kit that means our Armed Forces have the support they need to do their job effectively.”