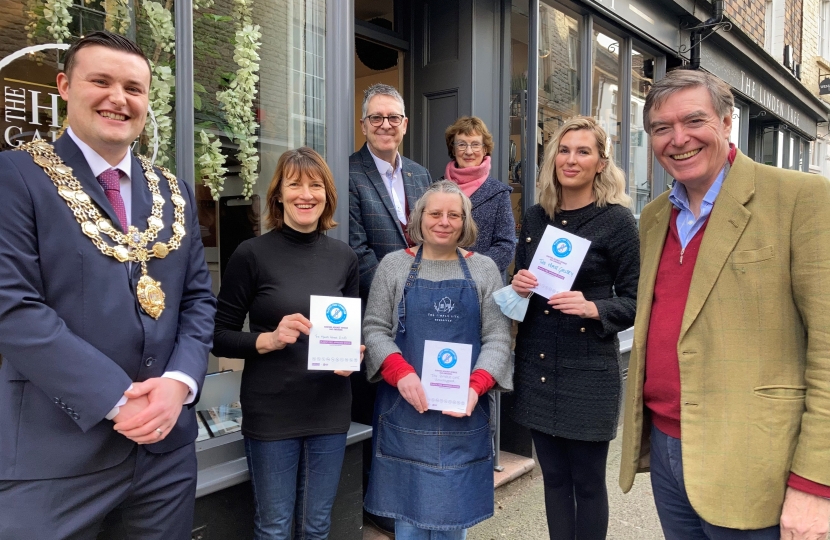 Local MP, Philip Dunne, was on hand to present awards to businesses in Much Wenlock on Friday for their efforts to reduce single-use plastic.

The awards were provided by Surfers Against Sewage, with whom Mr Dunne has been working on his campaign to clean up our rivers, who recognised each business as having plastic-free approved status.

Mr Dunne said: “I was delighted to help present awards from Surfers Against Sewage for plastic-free approved status to three Much Wenlock businesses.

We have all become much more aware of the damage plastic can do to our rivers and waterways, and as consumers, we can choose to support businesses that make a special effort to minimise the impact they have on the environment. So I commend the Hair Gallery, The Simple Life Unwrapped, and Manor House B&B in Much Wenlock, for taking such a proactive step, and congratulate them on securing this plastic-free recognition.

Following the awards, I was pleased to join the Mayor, Deputy Mayor and Town Clerk for a routine meeting to discuss current issues affecting the town.”

Mayor Dan Thomas, Shropshire Councillor for Much Wenlock, said: “I was delighted to be joined by Philip in recognising the hard work these local businesses have done to reduce their carbon footprint. All three are a credit to our wonderful town.”

Transport Secretary Grant Shapps on building a railway fit for the future.