Dunne calls on Lloyds to keep bank in Cleobury Mortimer 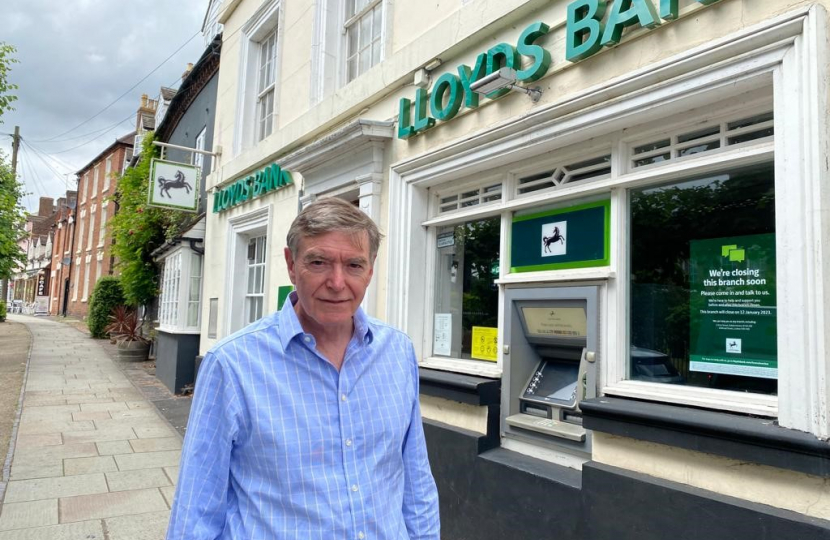 Mr Dunne has written to the Chief Executive of Lloyds in protest at plans to close its branch in Cleobury Mortimer on 12th January 2023.

Mr Dunne said: “I am deeply disappointed to learn that Lloyds has written to customers explaining it plans to close this branch in the New Year. I have asked to meet the relevant decision makers in an attempt to persuade them to maintain the branch, not least as this is the last bank in the town.

I have long championed the importance in maintaining a vibrant local economy of essential local services in all our rural market towns, including banking and cash handling for businesses and individuals alike.

While I accept that many people have become accustomed to use payment services on their devices, many elderly and vulnerable people in our community do not and are unlikely to be able to do so.

Local businesses will be particularly concerned about maintaining night safe deposit facilities, as well as cash and other face-to-face services for individuals in Cleobury Mortimer.

I am urging Lloyds to reverse its decision.”

Shropshire Councillors in Cleobury Mortimer have also expressed their concerns. Cllr Gwilym Butler commented, “I am very disappointed by Lloyds decision to close the last remaining bank in the town. It is now vital that we maintain the remaining services including the post-office where many banking services can be undertaken.”

Cllr Simon Harris added, “It is really disappointing that Lloyds is turning its back on its Cleobury customer base. I sincerely hope that they make every effort to ensure that local businesses and charities have the ability to deposit their takings and those who rely on in-person services can continue to access Lloyds banking.”

Our Plan for a Stronger Economy

Read about how our plan is tackling inflation and helping you with the cost of living.