THE LUDLOW CONSERVATIVE OFFICE REMAINS CLOSED TO THE PUBLIC 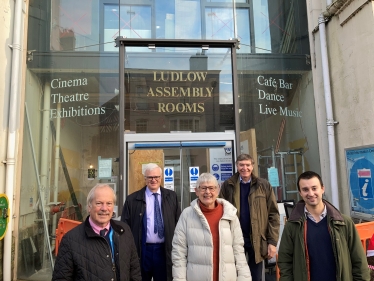 Ludlow MP, Philip Dunne, has welcomed announcement of a further government grant of £130,000 for Ludlow Assembly Rooms, announced today by the Department for Culture, Media and Sport.

As part of the government’s Culture Recovery Fund, Ludlow Assembly Rooms has been granted additional funding through the Arts Council for England, as part of a package of grants due to increased capital costs and delays for projects due to COVID19.

Four new local campaigners have been confirmed as Conservative candidates for

Dunne welcomes £6.3m for Royal Shrewsbury Hospital ahead of winter

Today we have published our Covid-19 UK Vaccines Delivery Plan, setting out h

Stay at home, protect the NHS and save lives

Prime Minister Boris Johnson has addressed the nation on Coronavirus…

Today, thousands of people across the UK will begin receiving the second…

This map shows the extent of the geographical area that we serve. This is the area of the United Kingdom that we represent on behalf of the Conservative Party.

Help us take action on local issues and build a better Britain.